The names Allman and Betts have a long, storied history in the world of Rock & Roll, conjuring up vivid memories of some of the most iconic and expansive rock compositions ever created. Stepping out of the shadow of their namesakes, however, Devon Allman and Duane Betts have bridged the divide between the two sides of the Allman Brothers family, creating a powerful new force to be reckoned with in the world of improvisational southern rock. Fresh off recording their first album, the Allman Betts Band is ready to explore new ground this March as they get set to play the Strand Theatre in what will be their fourth ever live performance.

Allman and Betts had been floating the idea of forming a band together for years. As a special guest for the Devon Allman Project last year, Duane Betts opened for the group’s shows across the country. Regularly returning during Allman’s set later in the show, the fit was just too natural to ignore. As the tour stretched on, it became increasingly clear that there was something special in the air.

“Obviously, having an Allman and a Betts and even an Oakley in the same group is a really sexy look on paper,” Allman concedes. “But if there’s not chemistry, there’s not chemistry. We’re at a stage in our lives where we’re not gonna phone it in or fake it. So, it really had to be legit in our mind and our hearts for us to even go forward with it.”

As the year went on and the tour progressed, they knew it was time for the next step. Filled with inspiration from one energy-filled performance after another, Allman and Betts soon began writing new music.

“We loved hanging out. We loved jamming together night in, night out,” Allman recounts. “We got a few months under our belt [and] it felt good with how the shows were going. We decided it was time to invest time into trying to write, and we would know very quickly, within a few days, within a few writing sessions, if there was going to be chemistry or not.”

And chemistry there was.

One of the key components to this formula is mutual respect, not just as musicians, but for each other as individuals. Allman and Betts found they were on the same wavelength when it came to the music they wanted to create, and how they were going to do it.

“The voices blended together well, and we worked good as a team. We respected each other’s riffs and lyrics and were wanting to go down the same, you know, style of road,” Allman says. “By the summer, I think we knew where we were headed.”

Allman and Betts had played together on and off over the past 15 years, however last year’s tour was the first time the pair really went on the road together. While Allman had his project, Duane had his own solo career as well as a slot in his father’s band.

Following Dickey Betts’ split from the Allman Brothers in 2001, the elder Betts formed his own group which would go on to tour successfully across the globe. Just a few years later, Duane was brought into the fold as well. By 2014, however, the 70-year-old Dickey Betts had announced he was ready for retirement. He changed course last year, returning for a show in Macon, Georgia and setting a number of tour dates throughout the rest of 2018.

In August, however, Dickey suffered from a stroke, leading him to eventually cancel the remainder of his shows. The final performance of the Dickey Betts Band at the Peach festival in Scranton, PA, was an iconic moment for father and son.

“It’s a really special thing to be able to play music with your family, and especially to be up on stage with my dad. Back when I was in his band, I really knew it was a special thing. And I knew that I would value those experiences for the rest of my life. But then after he retired, and we weren’t sure if he was going to play again, and then he came out of retirement and did those shows last summer, it really took on a whole new meaning,” Betts explains. “I think that last show at Peach Fest was really a triumphant moment for the whole band.”

Returning to the road with his father helped Betts reconnect to the music he held so dear, sharpening his skills and preparing him for the next chapter of his career.

“We really came into our own towards the end of that run and got better and better each night. And I was really proud of him and proud of the band for working hard,” Betts recalls. “There were some really glorious moments from that night. I don’t know if he’s going to play again, or if he’s not going to play again, but that was a great last show to have. I’m glad that’s a great memory.”

This theme of family has been a central component to the Allman Brothers from the beginning, with the family becoming more and more extended as the years go on. It’s precisely this kind of fellowship that created the Allman Betts Band, allowing them to forge their own musical path defined by a sense of love and brotherhood.

“It means a lot to play, [not] just Devon and [my] family’s music, but really that family of musicians that play that kind of music. Just live music, and we’re all part of the same family. So yeah, there’s a bunch of us,” Betts says.

Forming in 1969, the Allman Brothers Band quickly gained a large following. Despite the death of founders Duane Allman in 1971 and Berry Oakley in 1972, the band continued to tour with various lineups until 2014, two years before the death of Devon’s father, Gregg Allman.

With the 50th anniversary of the Allman Brothers Band this year, the Allman Betts Band certainly pays homage to the music their fathers created. The pair are anything but cover artists, however. With both Allman and Betts having their own bodies of work to draw on, the band serves as a conduit for everything that’s come before, as well as everything yet to be.

With the baton now passed, they are fully aware the band they created is completely unique in the history of Rock & Roll. Along with bassist Berry Oakley, Jr., the Allman Betts Band is comprised of the sons of three founding members of the Allman Brothers Band. The band’s lineup also includes percussionists R. Scott Bryan and John Lum, as well as John Ginty on keyboards and slide guitarist Johnny Stachela.

The Allman Brothers family were responsible for some of the greatest rock songs ever played, bringing people to the point of musical ecstasy with songs like Jessica and In Memory of Elizabeth Reed. The Allman Betts Band aims to bring fans to those same magical places, only this time through their own unique style and their own original music.

“There’s a lot of people excited that there’s an Allman and a Betts and an Oakley playing together. While we don’t have to keep that in the forefront of our minds, it is the obvious that it’s an unprecedented move in the history of rock and roll. There’s never been a band of people where the majority of the band had offspring that kind of continued down a similar path. That is special for their fans,” Allman explains. “So, the responsibility there isn’t to become a tribute band, but it’s to carry that torch, but do it in our own way, with our own style and our own vibe. I think that when the record comes out, everybody will see that we have our own thing to hang our hats on. It just so happened that the three of us have good chemistry and camaraderie and that family bond that the Allman Brothers shared 50 years ago.”

While their last names certainly catch people’s attention, their core mission is to put together the best band they can with musicians who can feed off each other and push the musical envelope. Allman and Betts say the fact they happen to be from the same musical family is just an added bonus.

“I think the idea is just to go and make music that you like, and that you think you would be proud of, and that’s doing it justice enough,” Betts says of recognizing the Allman Brothers’ legacy, “hopefully it makes everybody else feel good.”

While they’re both extremely talented musicians in their own right, they became greater than the sum of their parts as they explored undiscovered musical depths during the recording of their new album. Due out later this year, the album is set to highlight the fresh chemistry of the band, while at the same time giving the feel of an old record spinning on a turntable in years gone by.

The band embraced this old school approach on the record, looking at albums like The Band’s The Last Waltz, Derek & The Dominoes’ Layla and Rolling Stones’ Sticky Fingers for inspiration.

“Those three were [where] we’d love to see our shades and tones fall. And you know, we didn’t write songs to be like those songs. We wanted the record to feel like those records feel and make people feel,” Allman explains.

This vision found them recording on 2-inch analog tape in Muscle Shoals, Alabama, home of a countless number of famous albums. Now that the world has gone digital, recording on analog has become somewhat of a lost art form in the music industry. However, recording in analog helped the band find that perfect sound they were looking for with producer Matt Ross-Spang (Jason Isbell, Margo Price, John Prine, and Elvis Presley).

“Everybody does digital, we didn’t even dub down to digital to edit or to do the vocals (which makes it way easier). We did everything on 2-inch analog tape, we recorded 90 percent live. The record you’re going to hear sounds like Nineteen-Seventy-F*cking-Six, man. I’m not lying, it sounds thick and juicy and we’re really proud of it. I think the fans can expect some ghosts from the past in these songs, forging [their] way into the future,” Allman proudly explains.

The album is scheduled to be released mid-year and will serve as a spring board for a year-long world tour for the band. As they embark on a new frontier of music, the Allman Betts Band is set to create their own musical legacy sure to be cherished for generations to come. 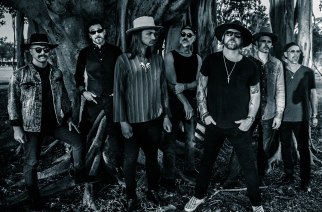