With an eclectic symbiosis of artists as diverse as Guns N’ Roses and Beethoven, DSQ has gone from humble beginnings to playing for U.S. Presidents with their electrified take on classical music.

As a child in Romania, music was always an integral part of violinist Ion Zanca’s life.  With classily-trained musicians on both sides of his family, he knew from a young age that music would play a key role in his destiny. After discovering the tremendous reaction to his unique mix of classical training and popular radio hits, Zanca’s Electric Dallas String Quartet would soon see him not only play at professional athletic events and alongside famous musicians, but DSQ would also bring his life full circle when he played for the U.S. President responsible for making his journey a reality.

At a young boy, Zanca had already had his musical path laid out before him. With constant encouragement and guidance from parents and grandparents, he studied classical for many years before eventually discovering his own way.

“When I was five, I felt like I was [already on the] road for a long time before I realized kind of what I like,” he says. “Study, study, study.”

The practice would pay off for the young Romanian when he would emigrate from his native country and later pursue a degree in music at Southern Methodist University in Dallas, Texas. Branching out into jazz and other established musical traditions, he knew something was still missing from his life. When Zanca discovered this uncharted path, the classically trained Dallas String Quartet would be forever changed, electrifying not only their instruments but audiences across the country as well.

“I remember doing a public event,” he recounts. “And we played a classical repertoire, you know, kind of open to the public, and some people were listening. But then we played a pop song, ‘Bitter Sweet Symphony’ by the Verve. All of a sudden, we have a huge crowd.”

The reaction was immediate and unmistakable, as crowds ate up the classical renditions of contemporary hits as quick as DSQ could compose them. While they had suddenly found their niche, the group was hesitant to abandon their classical upbringing. And so, the Electric Dallas String Quartet was born.

“It was really connecting with the audience, but then we really didn’t want to lose the classical side of it. So, I started writing music and arrangements,” says Zanca, who then began asking himself just how to balance both old and new. “We chose some of the most beautiful, most recognizable classical [efforts like] Chakovsky’s violin concertos, and we kind of match them with different pop songs that we felt [would go] together. So that’s how we came about.”

Boasting that DSQ is where Bach meets Bon Jovi, where Mozart meets Rihanna, the quartet has been wowing audiences for years with their innovative and fresh new take not only on classical compositions from hundreds of years ago, but reinterpreting radio hits in a way never before done in the music world as well. Some may say the divide between Michael Jackson, Beethoven and Led Zeppelin is simply too wide, that a canyon exists between those divergent musical stylings much too deep to overcome. In DSQ composer Zanca’s eyes, however, that divide is nothing but an exciting new challenge. If music is the universal language, DSQ serves as a veritable Rosetta Stone.

Beginning in 2007, the Dallas String Quartet started as many classical groups do, playing for fancy audiences, in front of packed crowds of formally dressed patrons of the arts. As they began their foray into the electric world, Zanca was sure that by gaining a new following of young music fans, he would no doubt lose the buttoned-up boomers who for years came to see music the way it was “supposed” to be played. Zanca soon found he couldn’t have been more wrong.

“The first time we did it, we played for a symphony. And I remember I saw this lady from the [symphony] board there, sitting in the front row,” Zanca now explains fondly, while at the time unsure just how this elderly woman would react to the energy-filled electric set they were about to embark on. “I knew they were going to love the first part, but I was really nervous about the second because we started with Kashmir by Led Zeppelin. If you go from Mozart to Kashmir, I was convinced they were going to stand up and leave right in the middle of the first song.”

Uncertain if this new musical endeavor would turn off the symphony board, made up of patrons in their 80’s and 90’s, Zanca pushed through as he put not only his own reputation, but that of his quartet on the line.
“After the concert we were invited to dinner with the board, and all these people are there. So, I got to talk to them a little bit, and they were so excited [that we] had so much energy. ‘We love to see the youth, and you guys enjoying what you’re doing.’ So, I asked this lady, ‘Which part did you enjoy more, the first or the second half? And I was convinced she was going to say first. She said, ‘The first was very good, but I really liked the second half!’”

It was then that Zanca knew they had struck gold. DSQ continues to create setlists in the same way today, with a more classically-themed opening set followed by an energy-soaked and adventurous second half. It’s this balance that has allowed the group to appeal to fans of all ages and backgrounds, converting followers in every city they visit.

“You will have people who are 80 or 90, like from the symphony board, and then you have kids that are in orchestra where they want to hear Rhianna. And when you are able to play music that is recognizable, enjoyable for that wide range of an audience, that’s kind of cool.”

The audience has only gotten wider as DSQ continues to throw themselves fully into their music, releasing their first live album, “DSQ Live in Concert.” Playing for huge crowds with acts like Josh Groban and Chicago and for sports fans at the College Football Playoffs, NBA and NFL, the group show no signs of slowing down. Their newfound fame would bring Zanca’s life full-circle, as DSQ played for President George W. Bush, giving him a unique opportunity to thank the president’s family for changing his life.

In 1988, the woman who would become Zanca’s wife was still in Romania, while her parents were able to escape the communist government and start a new life here in America.

“They kind of escaped Romania, they left, but they couldn’t take their kids,” he explains.

As time went on, they petitioned the U.S. government to finally allow them to reunite with their children at their new home in Texas.

“They tried to bring them, but the government wouldn’t let them come,” Zanca recounts. “So, they were able to meet George Bush Sr. at their church and gave him the file and asked for help. And with his help they were able to come to the United States.”

Telling the story to one of Bush Jr.’s generals in Fredericksburg, Zanca informed him they had a show scheduled to play for the president.

DSQ went on to play for Bush, with Zanca saying the president knew all about the hard road travelled by the Romanian family when they met that evening.

“He knew about it, and that day I brought my wife, and [he had] his wife,” he reminiscences. “It was just a special moment to think about. I was like, ‘I have a son, I have a wife, because your family was willing to help back then.’ So, we’re very grateful and had a great interaction with them, and they’re great people.”

Word of DSQ’s amazing live performances spread to the next administration, as years later the group would perform for yet another president, this time at President Barack Obama’s second inauguration.

While the group has found themselves with their unique and compelling compositions, they are certainly far from complacent. Every show, Zanca says, is its own challenge and experience. Every theatre has its own charm, its own sound and its own crowd. That special energy means every time they go out on stage, they play every song with their whole heart and soul in a way it has never been played before.

“You have to win the audience over every single time,” he says. “You have to prove yourself, that you know what you are doing, until they relax and they are able to enjoy it. There is a period of about 30 to 40 minutes. Think about it kind of like dating, “

As audience and band feel each other out for the first time, Zanca said band and audience alike has the same thoughts, as if they’re meeting a stranger for the very first time. What are they like? Are they energetic? Once the audience begins DSQ’s magical musical experience, the questions fade and all expectations go out the window. It’s this precise moment that Zanca lives for, and the crux of the group’s inspirational power.

“The greatest feeling is once they see it, and they’re able to relax and enjoy themselves. Then you see them, [they go] from being super formal to screaming and singing with you. We have all constantly tried to include our own story, and how we got there. What made us write some of the music, or all the elements that have affected [us] and make us [able] to be there that day in front of them and play. By the end of the concert, our goal is that they feel like they know us personally.”

This intimate musical conversation is more than a journey for the members of DSQ, it’s a way of connecting with a world that is often split into categories, a society that often puts ideas into neat boxes tied up with well-defined labels. With their electrifying and genre-bending shows, the quartet doesn’t just think outside the box. They ignore the artificial labels separating Guns N Roses from Chopin and teach the audience that in the end there is only music, universal, eternal and fun. 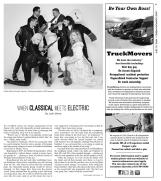 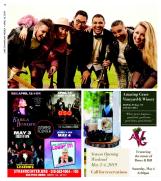 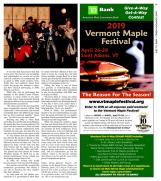 Willie Nelson & Friends, Will the Circle Be Unbroken? Allison Krauss was amazing, and her duet with Bonnie Raitt for Angel From Montgomery was so beautiful! What a great night of music!!
In this week's Lake Champlain Weekly, I I speak to Andy Falco of the Infamous Stringdusters. https://www.northcountrymoments.com/2019/09/04/the-infamous-stringdusters-rising-sun/
Thanks to @keenevalleylodge for providing me with a complimentary room at their beautiful Bed & Breakfast! Stay tuned for the April issue of Northern HGL, where I take an in-depth look at the lodge with owners George and Laurie Daniels.
Hey all! I'm really excited about my first Northern HGL article. In this week's cover story, I take a look at a home built in 1808 by Robert Cochran, the brother of Peru founder John Cochran. Scarlett McBride discusses the love and hard work that went into renovating the home in the late 1990s, and the history she uncovered along the way.
Excited to see my first Northern Exploring article in print. Pick up a copy or check it out online!
Took a stroll on the property today, back field is finally starting to melt! ☀️
%d bloggers like this: