Fresh off her exciting new EP Burning Rain, Josee Allard discusses the road that brought her to the North Country and her upcoming shows throughout the area.

DOUG DALLINGER was driving home from work in Victoria, B.C. when he heard a new song being introduced on the CBC.

It was by a new artist from New York who’s originally from British Columbia. He was stunned when he heard his niece’s name — Josee Allard. As her new single Burning Rain played on the radio, he quickly FaceTimed her to share the news from nearly 3,000 miles away.

“He called me, and I was freaking out; I had tears in my eyes,” Allard laughs. “That was an exciting moment.”

After Allard had come in second at an American Idol-type singing competition in Canada’s Pacific Northwest, Dallinger had helped fund her 2004 debut album. Now almost 15 years later, he was hearing his niece’s voice on the radio for the very first time.

Burning Rain, the title track from her 2019 EP, had been gaining popularity in her home province where she had lived with her aunt and uncle during her teen years. Despite having performed at the 2010 Winter Olympics in Vancouver, Allard says having family hear her music on the radio was truly the most rewarding moment of her long musical career.

Allard has been playing music her whole life, releasing a total of five albums in both French and English. Growing up, her grandfather’s home was full of instruments, and he was fluent in all of them. While he was strict about which ones she could play, as well as when she could play them, she soon found herself learning to play many of them. When her family moved to Victoria, she joined a performing group at her new school. The group would bring popular American songs to life in French. While it gave a young artist the chance to tour and play music, she yearned to do something more with her musical talents.

“I was like, ‘these songs are kind of lame,’” Allard says with some humor. “They were songs the teacher picked.”

Never a fan of copying someone else’s work, Allard couldn’t wait to write her own music. By age 15, she was doing just that — writing and performing her own music in bars and clubs all over Victoria and Vancouver. As high school ended, she met her husband, Dave Pearce. Although enrolled in college, her newfound love and fledgling music career was giving her second thoughts.

“I was [waiting] in line, and I threw a coin because I really didn’t know which way to go,” she says. “I was kind of torn between the two. I knew if I went to college there would be no future there. It was a long-distance thing already. I asked the guy in front of me for a quarter.”

She then asked the stranger: heads or tails?

“It landed on tails, and I didn’t go to college, and I moved to the states.”

That fateful coin toss set into motion a dedication to love and music from which Allard has remained committed all these years. Writing music, she says, feeds her soul in a way nothing else can, and performing that music is an essential part of who she is.

While she had been encouraged recently to participate in singing competitions like The Voice, Allard always felt that to stay true to herself; she needed to find her own path at her own pace. With the new album gaining popularity and a second place showing at Plattsburgh’s Battle of the Bands, that hard work and dedication is paying off for her.

Produced by Pascal Dufour, Allard has found a winning formula with her album Burning Rain. The EP centers around the multi-faceted concept of love, bookended by the uplifting tracks Love is All We Need and Harmony.

Allard doesn’t shy away from more difficult topics, however, as tracks like I Remember You looks through the eyes of an old friend who after years of substance abuse becomes someone else. Through these lyrics, Allard wishes for the past and the man she knows he could be.

At a recent performance, the song brought one woman to tears, as the powerful lyrics resonate with a generation of Americans ravaged by the opiate crisis.

“This woman is crying,” Allard recalls. “She said, ‘Please let me know when that CD comes out; I need that song.’ It touched her. Obviously, she is going through something. She knows someone that has this serious addiction, and they’re having a hard time. And I just wanted to be that little voice that said there’s hope, and we love you.”

Allard is constantly writing, but through songs like this one, she looks at life through someone else’s eyes. By shifting perspective, she allows both her and the listener to see life from a different angle and perhaps walk a mile in their shoes. As she finds her day-to-day life much more structured than in the past, through this technique she is able to transcend her everyday experience.

“It’s also really inspiring. I could be sitting home watching the snowfall; I get a glass of red wine, and I start writing and BOOM! It’s hard to explain exactly inspires me, but it’s everything, everywhere. When something is happening, and it’s something that I’ve never experienced, I love to try to imagine what it’s like but keep it abstract a little bit.”

While the Dufour-produced album features guest musicians, her current lineup includes percussionist Michael Dufort and guitarist Kevin Glennon. With Allard on bass, the trio has been impressing crowds throughout the North Country with her original songs.

Pointing out that most bands get their start by covering other people’s music, Allard is particularly proud that the road she has travelled was one of her own — made up of countless hours of writing and perfecting her music.

“Musically, I’m in the best place I’ve ever been in my life,” she says. “I’m performing my own songs. I’m so blessed to do that.”

With the addition of Dufort last June and Glennon in December, Allard feels she has found the perfect bandmates to show these songs to light. Her bandmates have brought a new life to her music, she says, and the trio truly feed off each other’s energy. With all three of them having room to improvise and do their own thing, there is a freedom to the group that is appreciated by band and audience alike.

“It’s more of a jam feel because [Glennon] can go and do these solos, and we bring it back down. The dynam-ics are really neat, and Michael [Dufort] is a very tasteful percussionist,” Allard says of her band, “little bit of country, little bit of reggae, little bit more of a beach vibe.”

Allard has been compared to a female version of Jack Johnson, a label she embraces with pride. Her laid back and easy-going style certainly shares similarities with Johnson, but her sound is all her own.

Finding this combination after all these years is noth-ing less than a dream come true. Being able to go out and share her music with the world has been the defining goalthroughout her life, and now more than ever, she says the time is right for the world to hear what she has to say.

With CDs quickly becoming a relic of days gone by, Allard plans to debut her next batch of original songs as a live album. Through filming the performances, she feels she will be able to better connect to today’s music fans and share the upbeat and positive vibe of her performances. While she says she never been able to stop writing music, it’s these performances that are a crucial part of what makes her who she is.

“If I don’t perform for two or three weeks, I get depressed. I really do. It’s starting to become a cycle,” she says candidly. “I don’t know what it is, man. I don’t know why I love it so much, but I love it. I love getting up there and connecting with people. I feel like I did my job just bringing people together.”

This boundless passion for music shows no signs of stopping, and despite her long musical past, Allard is just getting started.

“I like being able to affect people in a positive way; that’s the main thing. I’m just spreading that positivity because that’s my style — to feel good. I want every-body to be feeling amazing,” she says. “But it’s also really neat to be able to just be myself. It’s not forced; it just happened. And the inspiration just keeps coming in, and it makes me feel alive. Maybe it’s because I didn’t try to force things. Sometimes I do feel like maybe I could have pushed a little harder in some way, put myself out there a little more. But then, I guess it feels forced; it feels fake.”

If there’s one thing Allard is not, it’s fake. The most special part of her newfound recognition is the fact she earned it by staying true to herself and her vision — refusing to fit anyone else’s mold. That people have embraced her for who she is and the music she has created means everything to Allard.

Josee Allard will host an open mic at BluSeed Studios in Saranac Lake this Thursday at 7:30 p.m. and will perform a full show at Elfs Farm Winery & Cider House in Plattsburgh on Friday, June 21 at 6 p.m. She will also perform shows throughout the summer at P-2’s Irish Pub in Tupper Lake, Chateaugay Town Hall Theater and the Ausable Brewing Company in Keeseville. For more information, to see a complete listing of her upcoming performances or to down-load her new album “Burning Rain,” visit joseeallard.com. 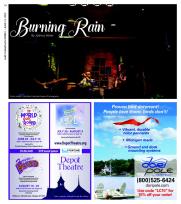 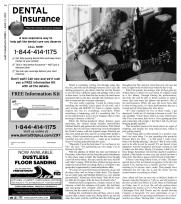