Guitarist Andy Falco of the Infamous Stringdusters discusses the fateful day at age 14 when his brother snuck him out of school to see the Grateful Dead – to now sharing the stage with the Dead’s own Phil Lesh. I also talk to Falco about the Stringdusters’ new album Rise Sun and their Grammy for Best Bluegrass Album for 2017’s Laws of Gravity.

Andy Falco was a relatively normal 14-year old kid growing up in Garden City, N.Y. However, all that was about to change. It was 1986, and rather than let him sit at a desk studying that day, Falco’s older brother snuck him out of school to see his very first Grateful Dead show in Hartford, Conn.

What he found there was a magic that would change his life forever. He immediately become part of a new community, discovering for the first time a place where the ordinary divisions of everyday life had all melted away. Left or right, black or white, old and young – for that brief window of time, none of those things mattered anymore. While he had been learning to play guitar with his brother for years, he now knew just what was possible through the power of music.

Over the following years, he would continue to revel in the utopian dream of the Grateful Dead as part of a community which truly and deeply cared for all its members. Now more than two decades since that fateful day in Hartford, Falco and his bandmates have created a community all their own.

“That was kind of the beginning of this pursuit,” Falco says. “Fast forward now, everyone’s trying to reach that feeling of community that the Grateful Dead was able to build around the music and everything. I think that’s sort of the blueprint for everybody in our scene anyway. You know, cultivate a community [of] people taking care of each other and being in the moment. That’s sort of it.”

Continuing in that tradition, in 2007 the Infamous Stringdusters were born.  A live band first and foremost, they toured across the country expanding and exploring their songs in new and different ways as they feed off the energy of their fans night after night. With Falco on guitar, Chris Pandolfi on banjo, Andy Hall on dobro, Jeremy Garrett on fiddle and Travis Book on the double bass, the quintet is a true bluegrass band – but as anyone whose seen they play can attest to, they’re also much, much more.

in 2018 the Stringdusters proved to the world that the magic of their performances could be translated to the studio as well, winning a Grammy Award for Bluegrass Album of the Year for Laws of Gravity.

“That was incredible, it was such an honor,” Falco says. “Not a lot of bands in our sort of [jam] world can be recognized in that way, and so we kind of felt like we were representing our whole community, our whole musical community.”

While Falco says the honor added even more fuel to their creative endeavors, it wasn’t something he dwelled on too much – and they certainly didn’t let it get to their heads.

“We had a great time. It was in New York, which was really cool because I live in New York. And so, it was really extra special for me to be happening at [Madison Square] Garden. But really, at the end of the day, you wake up the next morning and you’re going back to creating music. Ultimately, that’s what we’re here for. We’re just constantly and always striving to make the best possible music we can make [and] spread some cheer in the world.”

Their new album is certainly a testament to that mission. Rise Sun is the most uplifting and hopeful effort by the Stringdusters to date, as the group increasingly embraces their role of shining a light in an ever-darkening world.

There’s no one creative force behind the albums, Falco says, as each member brings their own original music and ideas to the group. As everyone presented their songs in preparation for Rise Sun, Falco says it was immediately clear they were all on the same page both musically and lyrically.

“It was really cool because there’s a lot of crazy stuff going on in the world in general, and a lot of divisiveness and all that. It was interesting to see when we all sort of came together with our songs, instead of it being really dark and dismal we’re coming with a message of hope and a message of positivity,” he explains. “Because we needed that, I know I needed that. And we had this realization that probably everybody needs that now.”

Oftentimes bluegrass songs tell of sad stories full of despair and loss, albeit with the twangy accompaniment of ever-upbeat and danceable picking to shake those blues away. With Rise Sun, the album takes a different path, serving to be that metaphorical sunrise signaling a new day on the horizon ready to break through these dark times.

“We’re really thrilled that we all were, sort of without even talking about it, [were in] the same place, in the same mindset. And so, the album does have a really powerful, cool and positive message.”

The album is the first of theirs released through their own recording company, Tape Time Records. For the self-produced LP, Falco says they used their live performances as a template of sorts when. The track list was agreed upon before recording even began, and over 9 days they recorded the songs in that order – appropriately beginning with the title track Rise Sun. They also decided to segue certain songs with instrumental numbers such as Cloud Valley, tracks which highlight the band’s full range of sound – from the melodic to the sometimes furious picking the band is known for live. The result, he says, is Rise Sun plays more like a snapshot of one of their performances than a traditional album.

The band’s evolution as both musicians and as individuals is never more apparent than on this release, as exemplified by the Book-penned track If You’re Gonna Love Someone. A message of self-love, Falco says the song was a product of his bandmate’s soul during a heavy time of transition in his life. Through this, he learned one of the most important lessons in life: ‘You gotta love yourself if you’re gonna love someone.’

“I really felt like [those were] some of the strongest lyrics that he’s ever written. I just think it’s so well crafted, and he did such a beautiful job conveying the story in that song,” he says. “It came from a really real place. I think when you’re writing music or playing music, you have to be genuine and you have to dig deep. You can’t just fake it out, or else it shows.”

The final track on the album, Truth and Love, perfectly encapsulates the Stringdusters’ message. While Falco had written the song years ago, he felt now was the time to officially lay the track down. The song, he says, is a reminder the most important things in life: namely, truth and love.

Truth, he says, is one of the most important things we need to hold on to today as we stand against the darkness and deceit becoming ever more common in the world.

Now that the album is out, Falco says he’s excited to get back on the road and spread that positive message to old friends and new across the country. However, for this tour he feels a renewed purpose as a musician.

“I never really felt strongly about this before, but now more than ever I feel like our job as musicians [is to create] that moment. For those two hours of time when everybody, no matter where they stand is in the same place, in the same mindset, enjoying themselves, smiling, having a good time, togetherness, and then peacefulness. And that’s really hard to come by these days, it’s become a really important thing.”

Falco says he’s happy when he sees people dancing and enjoying each other at their shows, no matter how far left or right someone’s politics happen to be.

“Everybody feels really honored to be in this position where we can unite together for a positive result no matter where anyone stands on anything. But we also know that there are things in this world that do need to be changed. If you want positive change, you have to start by spreading positivity.”

The experience of a Stringdusters shows harkens back to those days of togetherness he found all those years ago with his elder brother in Connecticut, with bassist Phil Lesh of the Grateful Dead even sitting in with the band on several occasions. For musicians so heavily influenced and inspired by Lesh’s music, Falco says moments like that are nothing short of incredible.

“It’s just a really special thing. We don’t take any of those moments for granted.”

And much like the energy he found that day playing skipping school with his brother, the Stringdusters are sharing that same vibe all over the country with their own brand of picking and playing. The band may be on stage, but the audience is equally as important in creating the music. As the Dead lyric goes: ‘the music played the band.’

“It is like a reciprocated transfer of energy. Music really – at the end of the day – is communication. But it’s not a one-way street. When you’re playing music on stage, you’re kind of floating and sort of observing. No different than when you’re at a great show and you’re in the audience, you’re floating above it all in this sort of trance-like state just taking it all in. It’s exactly the same for us on stage,” Falco says. “You’re after that euphoric sense of just being an observer, and letting the universe take you for this ride, the ride that you’re on with everybody in the room. That’s the magic, that’s what’s special about it. That’s an important thing because everybody needs that break from what’s going on.”

The Infamous Stringdusters will be playing at Plattsburgh’s Strand Center Theatre Wednesday Sept. 18 at 8 p.m. Tickets are $25 in advance or $30 at the door and can be purchased online at strandcenter.org or by calling the box office at 518-563-1604 (ext. 105) 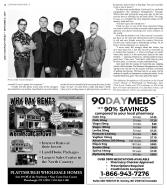